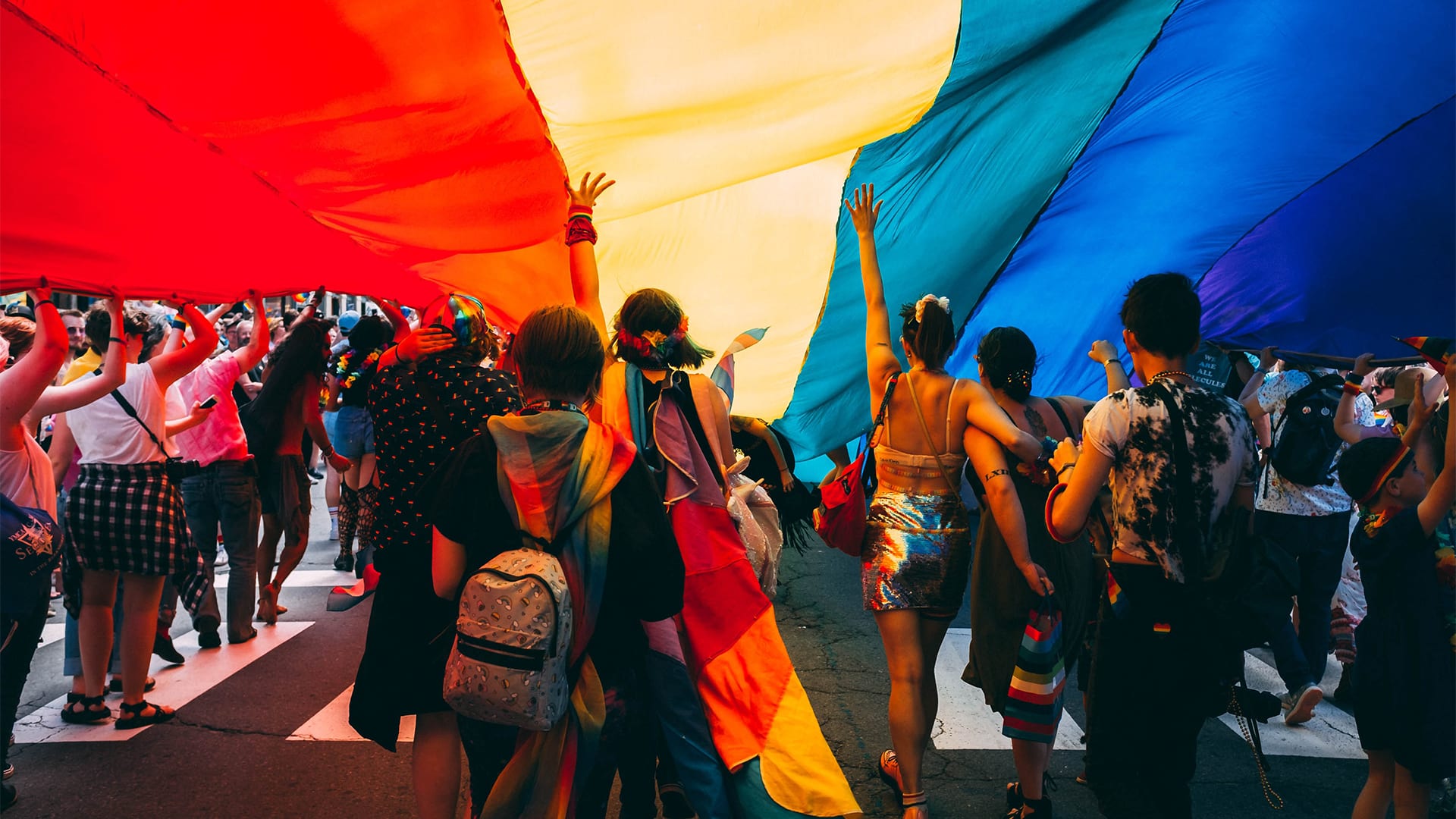 Me, Myself and Pride

Right now we are all living in a crazy, crazy time - trying to survive two world pandemics at once. First, the Covid-19 virus that has swept the world by surprise - killing over 500k people to date. Second, an ongoing disease that has spread through society for millennia - institutionalised hatred towards other human beings, in a game of power and domination instilled in global culture.

It's safe to say that pride month this year has been adapted to current needs. Instead, reinforcing the fight for black rights and the demolishment of systemic racism. Like it should be, humans standing together for equality regardless of race, religion, sexuality, or gender to revoke the old fashioned belief systems people are still entertaining.

However, with Pride month coming to an end, I feel now is an appropriate time to take a minute to shed some light on what pride means to me and my journey as a gay man. I don't mind getting personal, so hopefully, this will help someone out there in the big-wide world struggling to accept who you are, embrace and love yourself. You are not alone!

As mentioned on multiple blog posts now, I grew up in a small village, full of white, straight supremacy bullsh*t, where I never felt "at one with oneself".

I knew from an extremely young age I was gay, I fought with my "demons" as society told me to. In my head, over and over again, for 15+ years that I was a disgrace to myself and my family. The worst part, I genuinely believed it, a horrible person not worthy of happiness. With help from unsuspecting family members "If he does end up gay, it's because of your dodgy genes", and divisive language being a part of the everyday vocab. I convinced myself I was defective - a broken person, that until recent years I carried with me. I spent the majority of my life keeping people at a distance, not letting anyone in and building fake relationships with people. "If I get too close, I'll make it obvious, then everyone will find out, and they'll all hate me - aarrgh!" no, not healthy at all. It's most likely why even to this day I get flustered and panicky in some social situations.

Of course, I think back now as an out gay man in a happy, loving relationship, "u is stooopid, if only you knew" but living in that dark place from a very young age is a very different reality. It morphs the way you see yourself in a real troubling way.

I lived in the middle of nowhere - there wasn't an LGBTQ+ support network in my little village, nor were there any out gay people.

I took the first steps to come out at 15 to a teacher, not by choice but because the walls were closing in. I was struggling, some may say at breaking point. I was having "thoughts". At that time, my teacher became my rock - I could FINALLY speak actual real-life words to someone about the lifetime of feelings I had stored up inside of me.  I was a nervous, stuttery, social mess, but at least I was speaking. They could see the pain and advised me to see the school counsellor. After weeks of convincing me, I did, and I broke down - all of the thoughts I told myself were spilling out, my eyes were like waterfalls, and I couldn't find the strength to hold my emotions back any longer. It led me to tell another and make a new friend. With help, I began to accept who I was.

I had roughly three months left at school before I finished my final year, and the small support system I had for the first time in my life was about to be ripped away from me. I was going to be alone - again. To make it better, I was outed. People began asking me in the hallways, I kept hearing comments made behind my back, "how does it even work", "do you think he likes ...?", P.E got interesting too, I had a friend distance themselves from me. I'm guessing in the fear that I fancied them? Because logically, that's what being gay means - you fancy every male, ever. I remember spending a lot of time alone towards the end of school, a lot of staying late in Art class and roaming around the empty halls. I completely detached myself from everyone at this point.

College is where the change happened to me, I began studying design, and I was in a room full of creative people. A real mix of people, black, white, asian, gay, straight, bisexual, people with disabilities, I immediately felt more at ease and surprisingly to me, making friends was easy. I came out to my new friends shortly after, mixed reactions as not a single person suspected it, however overall I couldn't have asked for a more supportive group of people. They gave me the strength to embrace myself.

A couple of years later, I came out to my family. At 18, I felt I was old enough to handle any consequences that my family might throw at me. It was terrifying, this big secret I've been keeping to myself for as long as I can remember was finally about to be out in the open for all to see and judge.

Both my mam and dad hugged me and asked me questions, and it didn't take long for my mam to start talking to me about men. I'm lucky that both my parents were nothing short of amazing. It took a while, but eventually, it became the norm! I had finally done it I was an out, gay man, and then I realised I was one of very few out, gay men. Even though I was out, I was still alone. There was, of course, some gay people out in the area, but we just never clicked. I'm what someone might call a very masculine gay.

The cultural belief system instilled in me started to take over again, "you're defective, even the gay people don't understand you". It led me down a different dark path. (For another day)

I was in the middle ground, too gay for straight people and too straight for gay people, and to some extent, these feelings still creep up today, but I know this is a condition of society and the suppression I faced growing up.

A year later, I met my partner, and he made me realise I am worthy of love, despite every instilled belief I had about myself. Together, we picked up sticks and moved from the North East to Manchester. I remember the first time we went to the gay village in Manchester. My partner had been many times before. I was overwhelmed with emotion - I was scared. I felt vulnerable, and for the first time, I was in a place that people could see me. It took me a while to adapt in all honesty. It was a place full of people that I made to believe I shouldn't be like, social misfits, and then it hit me, I belonged!

For the first time, I had a community of people. Yes, some are more eccentric, but that's the beauty of such a place, no judgement. Masc, fem, man, woman, they're all just words with social constraints attached to them. There are parts of gay culture I don't and never will be able to understand, but it doesn't matter, because all people are accepted. This place is mine, and many others safe haven when out in public. I still now feel a sense of relief when I turn the corner, and I get to take off my armour for a short while. It's such a subtle feeling for me, and I can only imagine it's more prevalent for people with harder stories to tell than mine.

That feeling that I described, for me, is why celebrating pride is so important. As someone who used to have very limiting beliefs, this is a massive shift in my mindset from what it once was. I was once just as small-minded as the village I grew up in. It's a reminder of the hardships faced, a celebration of the moment, and the hope for a world where we are all equal - regardless of sexuality, gender, race, or religion. A world where children are no longer falsely made to believe that they are defective, or feel the need to shut themselves off from the world, out of the fear of being targeted because of who they are. A world where people don't need to come out, and instead are encouraged to explore themselves without punishment.

A world without hate.

LGBTQ+ rights have come so far, but the journey ahead is still so long. I am privileged enough to live in a city that supports me, but there are so many people in the world who don't have that network. Unfortunately, so much of the world isn't like the city I live in either. There are places in the world where myself, my partner, and people in our community can't visit without the risk of being hung, drawn and quartered for public entertainment for our sheer existence. There are so many people in the world like me who live in these same places. Anything I felt and experienced growing up must be a drop in the ocean in comparison to what they have faced, and continue to face!

That is why pride is so important, in the same way, #BlackLivesMatter is important, and any other minority movement fighting for an equal world. No one should have to face discrimination for simply being themselves - that is why we stand together!

If you've experienced similar, feel free to reach out and connect.

Or if you or someone you may know, may benefit from support here are some resources that might help:

Are you ready to build a brand?
Book a Free Discovery Call